With every profound experience comes immense joy but often also a feeling of deep sadness. Such was the case for me ‘coming down’ from my safari trip and leaving the only friends I had in Africa to be alone for a week. I mourned how beautiful it was, how I would never be the same and how sad It was to have to let it all go.

My Guide and local resident of Soweto, Nsiki

I landed in Joburg earlier this week feeling sorry for myself and generally just not ready to enter back the real world. My time in Joburg was short, mainly a stopover on my way to another destination, mostly because I heard of how dangerous the city was and as a solo Traveller I didn’t want to take too many chances. The only thing I planned was a trip to Soweto on my birthday as It was rated one of the only must do’s in town. I looked up Airbnb experiences and found a local guide, Ntsiki, who I figured could give me a real tour of Soweto. The first thing that struck me on her page was her description assuring tourists that Soweto is a safe place. She wrote, “Sowetan people have ‘Ubuntu’ – A humanity towards others”.

Now I have a confession to make. I actually believe I suffer from mild ADD. I get bored easily and I forgot most major details. I also have a memory problem, I forgot things that happened just days ago and friends constantly have to remind me of things I even did or said in a moment. This is important to note because when I do remember things it’s normally with acute accuracy such that you don’t want to bet me if I’m sure of something! A few months ago on a tour of Jerusalem, our guide was walking us up to the Western Wall where the Jews had been shut out from for centuries and she said look at the people as you approach, look at their faces, watch their emotions. It’s something I’ve always done intuitively but for some reason, her words touched me deeply! People speak without speaking, listen to their tone, watch their emotion, it speaks volumes more than words.

Some local lunch: This is a Kota which is basically a fries/balony/sausage/cheese sadwich YUM

As I’m back in the present I listen to Ntsiki tell her story. One she feels very strongly about. I admit it, I don’t get all the information as I said above, I don’t retain much. But there are things that shine through, how proud she is of Soweto and her people and how much of a community it is. This is a story of we. Not me. I listened to a song the night before called ‘Us’ by James Bay, a song he said he wrote about the power of bringing people together. There are no coincidences. To hear about the children of Soweto coming together as one to fight injustice at such a young age is such an uplifting story. 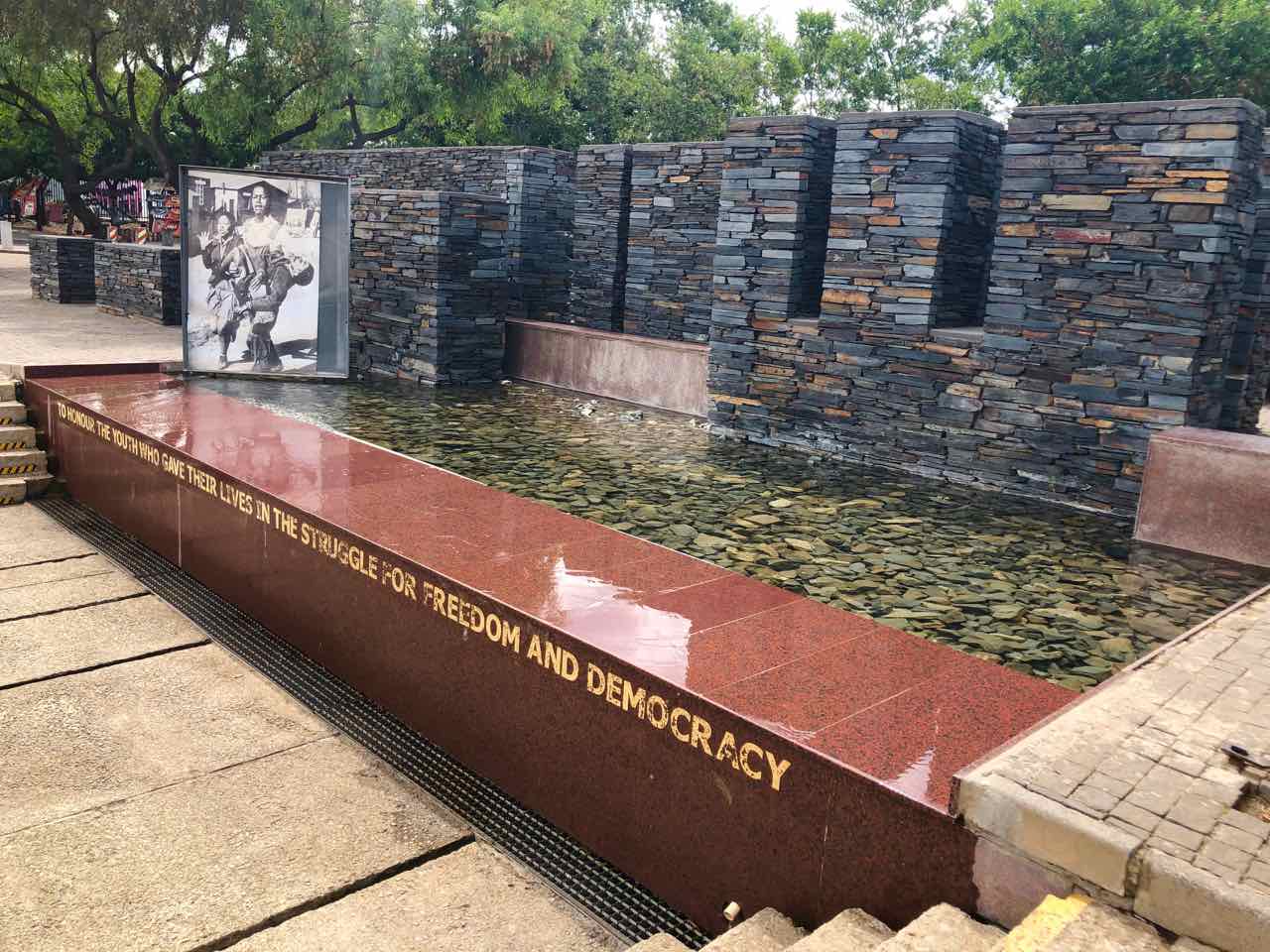 Just outside the Hector Pieterson museum

The youngest person to die on the first protest on June 15,1976 was a young man named Hector Pieterson. A stranger who happened upon the scene and saw Hector’s lifeless body picked him up and rushed him to the hospital. His motives were questioned by the authorities as to why would you help someone you didn’t know unless you were part of the ‘terrorists’ for lack of a better word. In the museum named after Hector, the stranger’s mother wrote “My son is no Hero. He did what he did because it was the right thing to do. Had he happened upon Hector and did nothing he would never have been allowed back into our community.”

So much power in one paragraph.

There is a deep sadness to know about the injustices that they had to go through but more than that, there was a Sense of pride, community and an extremely powerful message. The message was clear. You are not alone. As I celebrated my birthday in a foreign land so many people reached out to me with well wishes. They are here with me. They are apart. You are not alone. As I got to the airport this morning I happened upon the English couple who I had shared the tour with the day before. They were kind, they were hospitable, to someone they barely know. I can’t tell you how many times I have left people at one side of the country or in an airplane to see these ‘strangers’ again in a day or two. It’s more common than you would think. The world seems so large, and yet community is so small. As I walked away from them I realized this was the story I was meant to write today. I also realized I was wearing the shirt I wore on tour yesterday, trying to really save on my clothes now! I chuckled that Jamaican people woulda prolly thrown me on a cross and scandal-Ed me that I didn’t shower but hopefully these guys will understand my plight, traveling themselves!

The Mandella House which Ntsiki recommedned we not go in

A few minutes after I walked away from the couple I was trying to find the check-in counter. I was clearly lost and somewhere in thought about what exactly I was going to write. At that very point, an attendant passing by looked at me and said, “what are you looking for?” Such a small gesture, but so thoughtful that she would read the face of a stranger and recognize the need for assistance. It was like a little wink from the world in case I was going to forget the message. I’ve said it so many times I don’t think I can count. We as humans are all more inherently good than anything else. Ubuntu isn’t just something practiced in Soweto, it’s worldwide if we take the time to tune in to it! 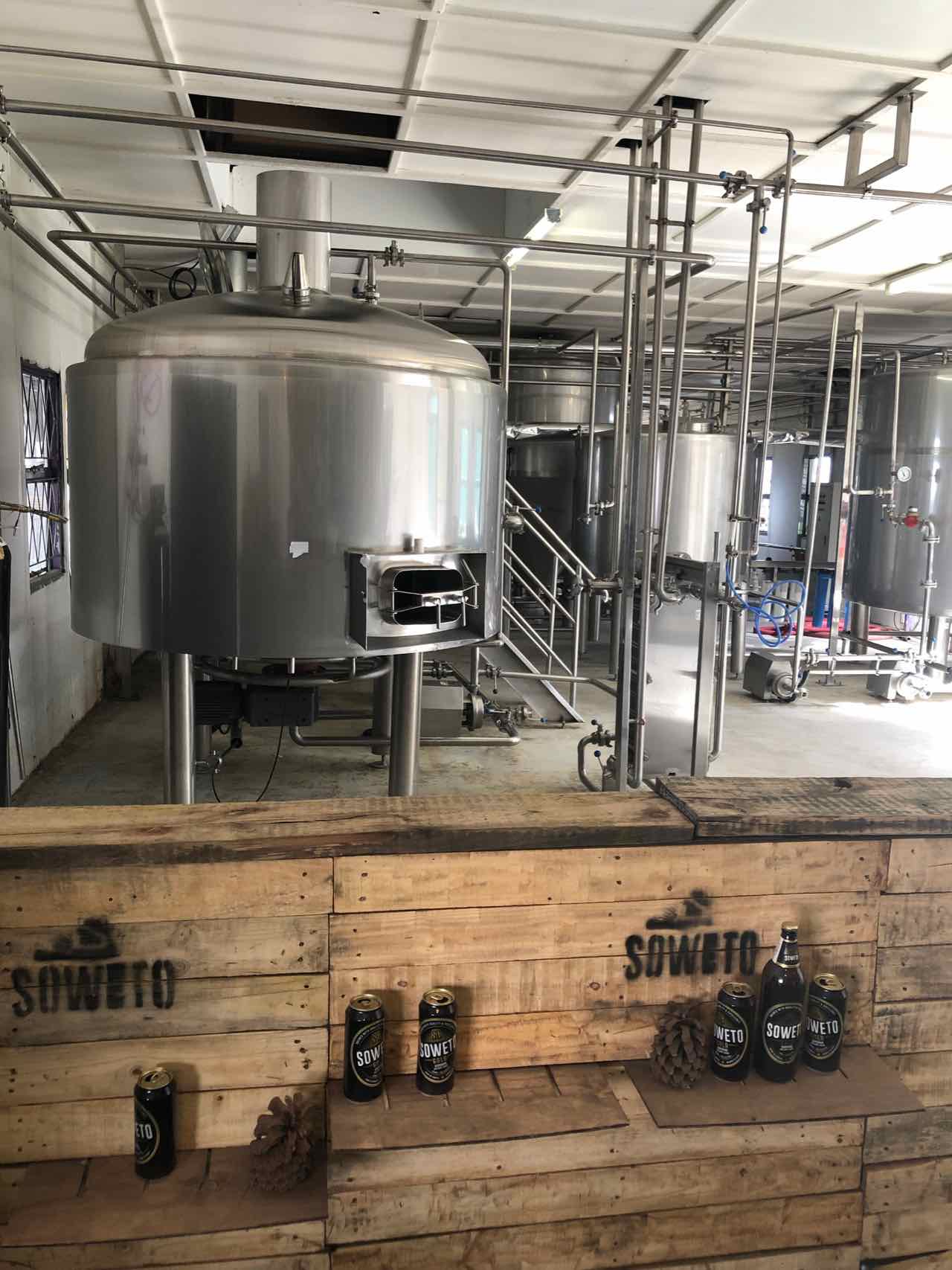 Ended off our day at the Soweto Gold Brewery Beer tasting!

2 thoughts on “Surviving Soweto: A case of Ubuntu”